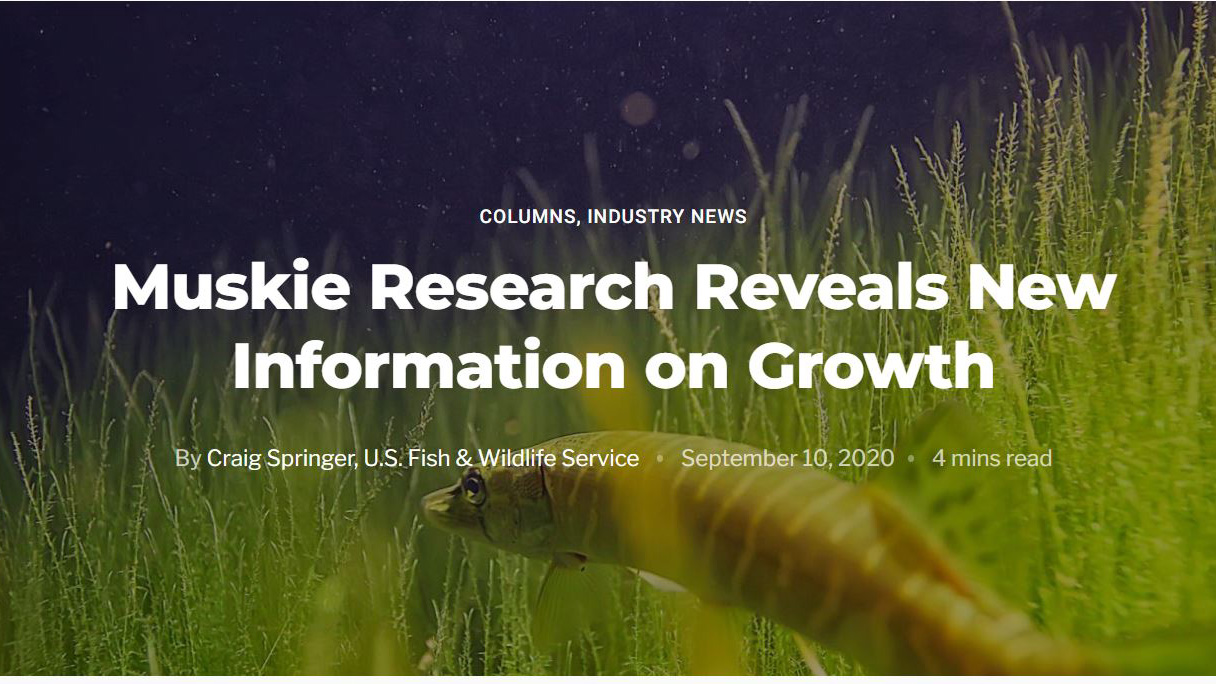 This article originally appeared in Fishing Tackle Retailer on September 10, 2020.

Recently published research on muskellunge, paid for by federal excise taxes on sport fishing gear and motorboat fuel, reveals new information on how well the stocked fish grow in northwestern Wisconsin lakes. The information has immediate and long-term consequences that will help improve muskie management—and fishing.

Little is known about the muskie growth through its years, particularly later in their long lives—they live up to 30 years. To estimate the age of fish, scientists typically use scales or bony structures such ear bones that lay down rings like a cross section of a tree. Scales are not so reliable with bigger, older fish. To use ear bones requires sacrificing the fish—and that is not something anyone wants to do with big muskie.

To fill this knowledge deficit, 10 years ago scientists from the Wisconsin Department of Natural Resources embarked on a large 20-year study of muskie life history and habitat use. Determining known age and growth information was an essential first step.

Scientists implanted tags into young anesthetized muskies of a known age raised in a Wisconsin fish hatchery. The tags are akin to what you might implant in your dog or cat to recover it should it get lost. Each tag has a unique signature. Scientists released known-age tagged muskie in 10 lakes. The researchers recaptured tagged muskies over time. Volunteer anglers and guides were given tag readers or supplied their own and trained in their use. These citizen-scientists augmented the researchers’ data with tagged fish they caught and released.

The first 10 years of data showed that muskie, regardless of sex, grew rapidly in their first three years of life, to around 26 inches long. From that point forward, growth slowed and the males and females exhibited different growth rates. Female muskie reached the 40-inch statewide minimum length limit for harvest at nine years of age. Few male muskies in the study ever reached 40 inches. Trophy muskie coming out of the northwestern Wisconsin lakes are essentially all female fish and that may have implications in setting sustainable fishing regulations—and improve muskie fishing. This research sets a reliable, non-destructive standard for determining muskie age and growth in Wisconsin and beyond.

Muskie fishing is much like investing in the market—to reap the rewards of your venture, it takes time. And, so does scientific research. The next 10 years of this long-term study, funded with excise taxes on sport fishing gear and motorboat fuel via Sport Fish Restoration grants, is expected to reveal more about muskellunge habitat use at different ages, and between lakes with differing food bases and angling pressures. In the end, Wisconsin anglers may enjoy better fishing through scientific research paid for by industry.