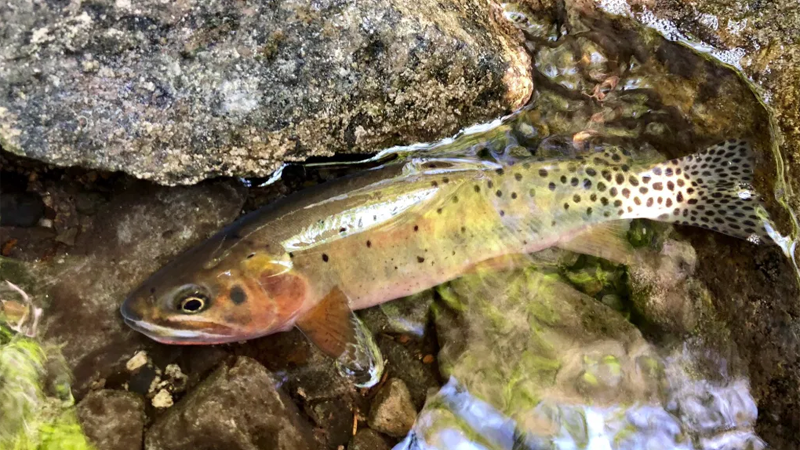 This article originally appeared in Fly Life Magazine on July 29, 2020.

From nearly anywhere in my Santa Fe County home, I have the most fortunate view of the Sangre de Cristo Mountains. It’s where the Rockies start in New Mexico. As I write this, day bleeds into night, that period when the Muses visit painters and poets.

A towering anvil-headed September storm cloud turns the color of a watermelon over Santa Fe Baldy and Hamilton Mesa. The trailing curved edge of the cloud as it brushes over the mountain tops looks like a sheer lavender curtain moved by wind through an open window.

The moisture wrung out of this moving piece of art strikes the steep dusky mountain slopes, softened by green and blue needles of pines and firs and spruces. The water funnels through gray granite crevices as it trickles downhill. The rain soaks into rivulets and then into ritos with names such as Azul, Padre, Valdez and Chimayosos. These noisy cobbled brooks will soon beget the Pecos proper, but before they do their waters stall in dark pools under the cooling shade of gangly alder trees whose roots knot up the streambank. This is habitat for Rio Grande cutthroat trout.

The Rio Grande cutthroat trout is named for the splash of crimson below its gills, and for the fact it occurs only in its namesake river basin. In the spring of the year, the spawning males are awash in red over their head and chest. It’s stunning, as if they are soaked in blood.

Under these September clouds, the fish lie there finning in pools as freshets wash over them under the shadows of ponderosa boles that have fallen into the stream. Or they lay on the edge of a lichen-covered boulder in an eddy just past a chute of frothy water waiting for a grasshopper or caddisfly or a clumsy moth to flit too close.

With a dart and roll, a bug becomes food. That is unless that bug is a look-alike, mere fur and feathers adorning a tiny barbless hook. A tug and a splash, and in a moment I can see my reflection on a trout’s shimmering flank and feel it flex its cold muscles in my wet hand as its slips back into the water with a parting flip of its tail teeming with spots like peppercorns.

It’s a persistent longing: outwitting cutthroat trout in the high country, especially with my children, is among my most favorite pastimes. Never do I feel more alive; I’m a participant in nature and not merely an observer. These tiny streams bordered by brush and boulder require stealth and attentiveness and some resolve. The experience hones your senses and is head-clearing, like floss for your psyche. I find myself thinking that I am not thinking at all.

A friend of mine likened fishing cutthroat waters to doing yoga while casting. It takes some doing to thread a bow-cast beneath overhanging alders from behind a boulder propped on an elbow. Many cutthroat streams in the upper Pecos as elsewhere in New Mexico are typically small and not well visited. You’ll make your own trail over deadfall and boulders and through patches of prickly wild raspberries properly colored like a trout’s throat.

Trout don’t grow large in small waters, but still, when I catch a cutthroat I feel like a man who just found a bag of money. Each fish is uniquely adorned with a constellation of black spots lying on a background from a pallet of paint, borrowed from a September sunrise accessorized with last night’s tattered, left-over clouds.

The Rio Grande cutthroat trout is the official state fish of New Mexico and holds the distinction of being the first trout documented in the New World. In 1541, as the Coronado’s entrada passed near Pecos Pueblo, one chronicler noted truchas swimming about.

Now, 477 years later, the trout’s native range is much reduced, yet still affords remarkable angling opportunities found nowhere else
A partnership between the U.S. Fish and Wildlife Service’s Wildlife and Sport Fish Restoration Program and the New Mexico Department of Game and Fish strives to multiply those opportunities via science-based conservation endeavors. Those endeavors are funded via fishing license sales and through taxes paid on fishing rods and tackle, electric motors and small engine and motorboat fuel. The funding allows Rio Grande cutthroat trout biologists to renovate streams and expand populations, keep a rigorous and healthy hatchery brood stock, ensuring the genetic purity and future of this southwestern native trout.