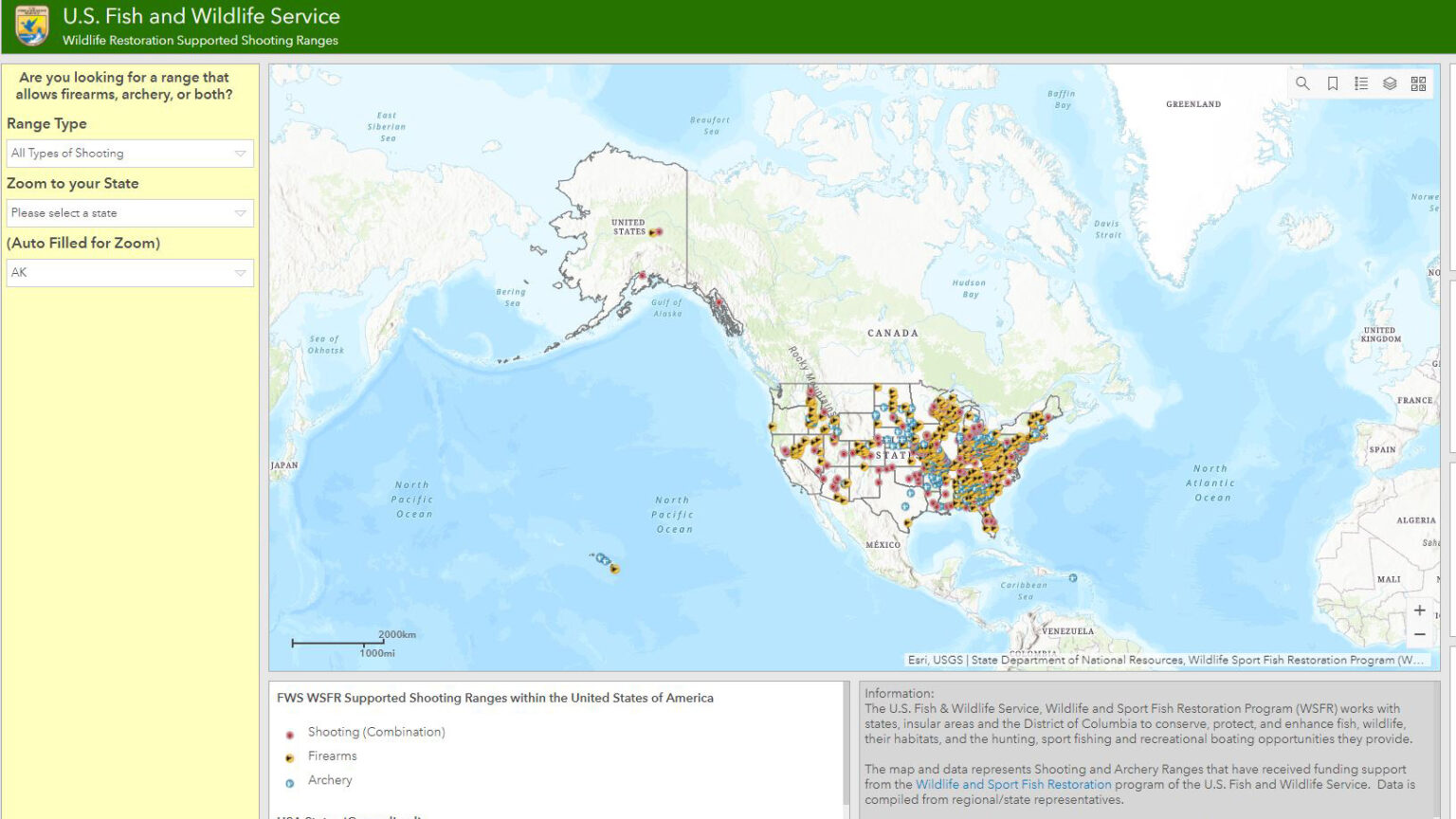 Finding a place to shoot safely is now easier than ever thanks to a new interactive tool premiered today by the U.S. Fish and Wildlife Service (Service) as part of its 83-year partnership with states, industry and individual firearms users who help pay for wildlife and natural resource conservation, hunter education and public shooting ranges through the Wildlife Restoration Program. Millions of dollars are generated annually by the excise tax program known as “Pittman Robertson,” named after the congressional visionaries who wrote the law that underpins the system that contributes to the North American Model of Conservation.

The new map identifies a total of 623 ranges across the United States, including 183 archery ranges, 285 firearms ranges and 155 archery and firearms combined shooting ranges, highlighting opportunities and access from California to Massachusetts. Ranges are operated by state wildlife and natural resource agencies, which provided the map data to the Service.

“Anyone who draws a bow or sights a target can benefit from this exciting new map,” said U.S. Fish and Wildlife Service Director Aurelia Skipwith. “The map and the facilities it features demonstrate the strength of the enduring partnership among states, the Service, firearms and ammunition manufacturers, and individual recreational shooters. This partnership – supported and promoted by the Trump Administration and Secretary of the Interior David Bernhardt —  is foundational to wildlife and natural resources conservation in America, all while promoting safe, responsible use of firearms.”

“This is an excellent tool that will help hunters and shooters alike find shooting ranges paid for with their excise taxes,” said Erica Tergeson, Director of the National Rifle Association’s Hunters’ Leadership Forum. “Once again, this shows Director Skipwith’s dedication to all Americans’ access to shooting ranges, marksmanship and hunter safety.”

“The National Shooting Sports Foundation (NSSF) couldn’t be more proud of the entire industry’s contributions to safe recreational shooting and conservation. This longstanding partnership between firearm and ammunition manufacturers and the U.S. Fish and Wildlife Service is a benefit to all,” said Lawrence G. Keane, NSSF Senior Vice President of Government Relations and Public Affairs and General Counsel. “The Wildlife and Sport Fish Restoration Program is a model of how private industry and government can achieve conservation success. This map of public shooting ranges is a testament to the work that’s being done. Recreational shooters are hungry for places to practice and hone their skills. The more recreational shooters we can accommodate, the greater success it is for conservation.”

“Not only is outdoor recreation one of our nation’s largest economic engines that benefits conservation, its health benefits are likely more important than ever,” said Chuck Sykes, Chair of the Association of Fish and Wildlife Agency’s Hunting and Shooting Sports Participation Committee and Director of the Alabama Wildlife & Freshwater Fisheries Division. “The Service’s national shooting range map is an excellent new tool available to the public so they can easily find locations to safely participate in one of this nations’ important outdoor recreational activities.”

“We are very excited to see the creation of the new interactive national map, which shows locations of all recreational shooting ranges throughout the country that were created or maintained using funds provided through the Wildlife Restoration Program,” said Wayne Hubbard, co-founder and host of Urban American Outdoors. “The map will make it much easier for the public to engage in the shooting sports, at their convenience, by helping them find facilities available to the public in a nearby location.”

In addition to administering Wildlife Restoration Program funds, the Service, under the Trump Administration and Secretary Bernhardt, has made access to public lands for hunting and fishing and other outdoor recreation a priority from day one and is leaving a national conservation legacy the likes of which has not been seen since President Theodore Roosevelt’s time in office.

This year, 859 hunting and fishing opportunities on national wildlife refuges were opened or expanded which, added to last year’s figures, total more than 4 million acres nationwide. Earlier this year, President Trump signed into law The Great American Outdoors Act. It is one of the greatest conservation achievements in U.S. history, and it will, among other things, help the Service address a backlog of maintenance issues that will enhance the National Wildlife Refuge System for current and future generations of Americans.

The Service’s Wildlife and Sport Fish Restoration Program works with states and insular areas to conserve, protect and enhance fish, wildlife, their habitats and the hunting, shooting, sport fishing and recreational boating opportunities they provide. The Wildlife Restoration Program is supported by an 11-percent excise tax on sporting arms and ammunition.

Funds are appropriated to the Secretary of the Interior and apportioned to states on a formula basis for paying up to 75 percent or 90 percent of the cost for approved projects. Project activities include acquisition and improvement of wildlife habitat, introduction of wildlife into suitable habitat, research into wildlife problems, surveys and inventories of wildlife problems, acquisition and development of access facilities for public use, and hunter education programs, including construction and operation of public target ranges.

America’s sportsmen and women generated nearly $1 billion in excise taxes last year, supporting critical state conservation programs. These funds are generated by excise tax collections on hunting, shooting and fishing equipment and boat fuel that is distributed to all 50 states and U.S. territories by the Service.

To date, the Service has distributed more than $22.9 billion in apportionments for state conservation and recreation projects. The recipient state wildlife agencies have matched these funds with approximately $7.6 billion throughout the years, primarily through hunting and fishing license revenues.

In addition to excise taxes collected from these activities, hunting, fishing and other outdoor activities contributed more than $156 billion in economic activity in communities across the United States in 2016, according to the most recent National Survey of Fishing, Hunting and Wildlife-Associated Recreation. More than 101 million Americans — 40 percent of the U.S. population age 16 and older — pursue wildlife-related recreation, including hunting and fishing.